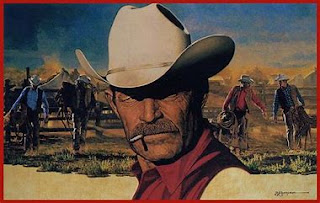 There comes a time in life when we, as children, move on to adulthood.  It's a natural progression of life...for most people.  Gone are those days of acting and playing as children do.  Suddenly, our lives are opened up to something altogether new...responsibilities.  I think back every so often to what my days used to be like when I was younger.  A time when things like paying bills, work and thinking of someone other than myself never even existed.  Of course, back then that all seemed normal to me.  Why do I reminisce about those long forgotten days?  Well, it seems that that these days there is growing concern that there are some among us that missed the boat when it came to graduating into adulthood.  In churches across the country the cry goes out...where are the real men among us?  I will say that this is not simply a Christian issue, but one we as a society have been facing for some time.  Before we can answer the question of where a real man is, we must first define what we expect a real man to be.  So, what is a real Christian man?  Well, Christian author John Eldredge spoke to his idea of the new era of Christian men in his popular book Wild At Heart.  In his book, Eldredge speaks to  men of God doing men things.  He popularizes the idea that men were made for adventure, for rough and tumble play and living.  According to Eldredge, every man carries within him the desire not only for adventure, but for a female to rescue.  Now, many people may think right away of men living out a cowboy movie, but there may be some truth to where John Eldredge was attempting to lead us.  For I can remember walking through the woods behind my childhood home with my rifle in hand stalking my enemy as I struggled to make it back from behind enemy lines.  However, in my case, the rifle was a stick I found and my heroic assault usually lasted about as long as it took for my mom to call me home.  John Eldredge may say that I was doing what I desired to do.  For me, I was simply doing what kids have been doing for thousands of years.  Be it stalking a enemy or playing sports, kids around the world do what they do.  That's the life of being a child.

No one can enter a strong man's house and plunder his goods, unless he first binds the strong man.  And then he will plunder his house.
Mark 3: 27 NKJV

The question of what makes a man is one that has been with us for as long as men have been living.  Of course, along with that came different ideas of what makes a man.  John Eldredge was one of those ideas.  When I was growing up, my idea of a adult man was one who came and went as he pleased, smoked his cigarettes and commanded the respect of those he met.  That was my dad, and how I began to see what I needed to become a man.  There's no doubt that many of us get our own images of being a man from our own parents, and I was no exception.  But what happens when that image is no longer around?  Who is your model then?  Thankfully for me, I had a few more role models left to emulate as I grew up.  However, if this were indeed the end of the story, then we wouldn't be facing that question in our churches of just where the Christian men are.  So, where are they?  Well, I believe that many a man has been hijacked by a political agenda over the years.  I still get more than a bit of pushback when I gripe about the affect on the American male since the emergence of the women's liberation movement of the 1960's.  Where men were accustomed to leading, providing and being who men were, the switch was now flipped where being a man was a bad thing.  Suddenly, men were brutal, chauvinistic and violent.  Now, I admit that there are those who have never outgrown their childhood, but to classify all men in this way is dangerous.  The end result is that you now have a generation of men confused about their role in life.  Do they embrace the traditional role of men and take the lead to provide for their families?  Or, do they simply step aside and allow women to fill that role?  Well, from what I've noticed, our attempts to bring equality to our ranks have left us with some undesired consequences.  And do we really need to "create" that equality?  We're told that God has breathed into each of us the breath of life {Genesis 2:7}.  We're told that God also created both male and female in His very image {Genesis 1:27}.  Instead of wondering where all the men are, we should be asking ourselves where the men in Christ Jesus are.